In my last post, we used our micro-framework to learn about and create a Convolutional Neural Network. It was super cool, so check it out if you haven’t already. Now, in my final post for this tutorial series, we’ll be similarly learning about and building Recurrent Neural Networks (RNNs). RNNs are neural networks that are fantastic at time-dependent tasks, especially tasks that have to do with time series as an input. RNNs can serially process each time step of the series in order to build a semantic representation of the whole time series, one step at a time.

In this post, we will understand the math and intuition behind RNNs. We will build out RNN features in our micro-framework, use them to create an RNN, and train the RNN on a sequence classification task.

A recurrent layer is a layer which has a temporal connection to itself. This connect allows the layer to model time-dependent functions. Let’s say our data is a time series of vectors which vary over every time step. The recurrent layer consists of a cell which takes as inputs the current time step and the last cell output. The cell does some computation on the inputs to produce the output. 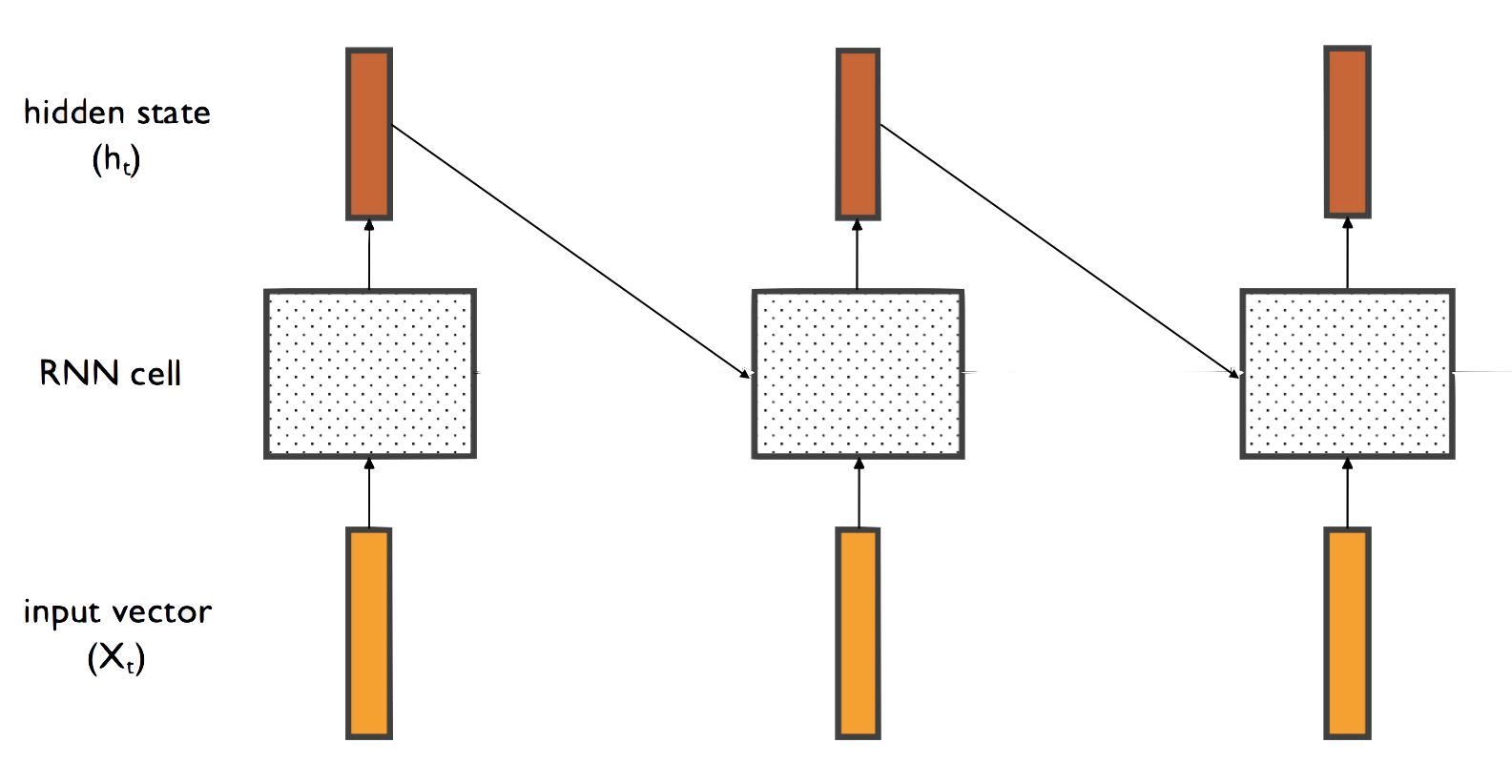 Note that there is only one RNN cell, but it has been repeated multiple times for sake of simplicity. At each time step, the cell produces an output, the hidden state of the cell. If our input time series has time step vectors with D elements, and we chose our hidden state vector’s size to be H, then a time series of dimensions N x T x D will have an output of N x T x H, where N is the batch size and T is the amount of time steps in each time series. We can use this output tensor to learn insights about the time series.

The simplest way to combine the two inputs (the current time step input as well as the previous cell output) to produce the next output is to multiply each by a weight and add them together–with a non-linearity on the output, of course. Thus, we have our very simple vanilla RNN cell equation:

That’s it! This is pretty easy to implement, so let’s get right into it. First, the initializer:

Next, the forward pass. Since the RNN cell is reused for every step in the time series, we create a step function which executes at each time step. The forward function, then, calls the step functions at every time step:

We return a tensor which is a time series of all of the cell outputs at each time step.

We loop backwards through the incoming gradient’s time steps, pass them through our backward step function, and accumulate the gradients through the backward unrolling. Note that we add the derivative of the previous hidden state to the gradient on each output hidden state at time step. This is because the previous hidden state is passed in as an input in the forward pass and hence must be accounted for in the backward pass, and it’s most convenient to do this computation in the series function rather than the step function.

That’s it! Now we can use vanilla RNN cells in our code.

Let’s put our vanilla RNN cells to use on a sequence classification task! Let’s have a time series of 2 elements, where the label is a 0 if the difference between the two is <= 0, and a 1 otherwise. Let’s create a quick loader class to create such a dataset:

Let’s initialize our loader and network:

Notice that we use a Flatten layer to turn the time series of hidden state outputs into a 2-dimensional tensor that can be passed into the final Linear layer. Finally, let’s train our model!

That’s it! We have used our Vanilla RNN cell on a fairly simple time-dependent problem that illustrates its purpose and functionality. However, there’s a problem–it doesn’t work! Because we repeatedly multiply the same cell weight with its derivative, the gradient will either explode or vanish. This is (rather fittingly) called the exploding/vanishing gradient problem. To solve this problem, a new type of cell was invented: Long Short-Term Memory (LSTM) cells.

An LSTM cell, similar to a vanilla RNN cell, uses both the current input and its previous output to produce its current output. However, what’s interesting about LSTM cells is that it actually produces two outputs, both of which it uses in its next unrolling: the hidden state and the cell state. The cell state is only modified through the use of controlled gates, as defined by these equations:

The benefit of the LSTM cell is that there is a direct connection between the cells previous state and its current state, meaning that gradients can more easily backpropagate through the cells without vanishing. Because only the forget and input gates directly interact with the cell state, long-term dependencies can more easily persist through many unrollings.

Let’s start implementing an LSTM cell! We can make the implementation easier on ourselves if we think of all the inputs getting concatenated and being multiplied by one huge weight; we then split the output of this computation into the individual gates. Here’s the initializer:

Now, we can replace the VanillaRNN layer with our LSTM to get much better performance on our sequence classification problem. Sweet!

Recurrent networks are incredibly powerful tools which can be applied to some incredible problems. For example, in language translation, a source sentence is encoded by an RNN into an intermediate representation of the semantic meaning of the sentence, and then that representation is used by another RNN to decode it into a target language. Here is a paper on using RNNs for machine translation, and here is a PyTorch tutorial on the subject.

Another cool application of RNNs: a convolutional network pretrained on image classification is used to turn an image into an intermediate representation, which is then used as the initial hidden state of an LSTM cell to caption the picture. Here is the original paper on topic, and here is a Torch (not PyTorch) implementation of the latest iteration of the paper.

One last plug: one of my close friends made a hilarious RNN project which is trained on Trump’s Tweet corpus to produce “new” Trump tweets. Check out the code here.

I really hope you’ve enjoyed this tutorial series and found it to be educational and useful! If you have any questions, you can reach out to me at @ShubhangDesai on Twitter. There’s a whole world of deep learning, the surface of which we’ve barely scratched–go and explore it! Happy learning!