This past year, I took Stanford’s CS 231n course on Convolutional Neural Networks. My final project for the course dealt with a super cool concept called neural style transfer, in which the style of a piece of artwork is transferred onto a picture. Here’s a classic example–a picture of Hoover Tower at Stanford, in the style of The Starry Night: 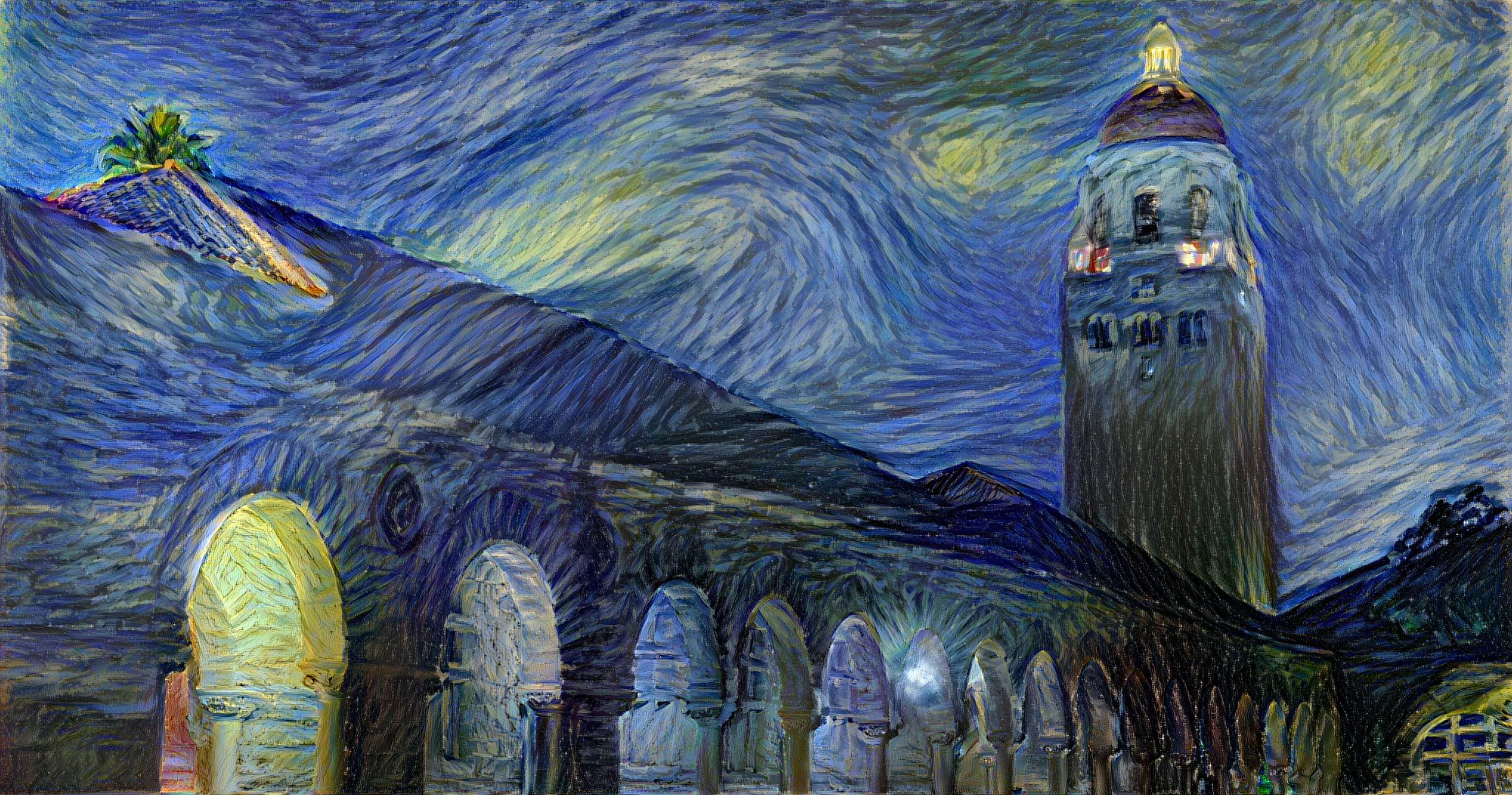 There is a long and rich history of the buildup to neural style transfer, but we’ll focus specifically on this sphere in this article. The first published paper on neural style transfer used an optimization technique–that is, starting off with a random noise image and making it more and more desirable with every “training” iteration of the neural network. This technique has been covered in quite a few tutorials around the web. However, the technique of a subsequent paper, which is what really made neural style transfer blow up, has not been covered as thoroughly. This technique is feedforward–train a network to do the stylizations for a given painting beforehand so that it can produce stylized images instantly.

In this tutorial, we will cover both techniques–the intuitions and math behind how they work, and how the second builds off the first. We will also cover the next step in cutting-edge research, as explored by me in my CS 231n project, as well as research teams at Cornell and Google. By the end, you will be able to train your own networks to produce beautiful pieces of art!

In this method, we do not use a neural network in a “true” sense. That is, we aren’t training a network to do anything. We are simply taking advantage of backpropagation to minimize two defined loss values. The tensor which we backpropagate into is the stylized image we wish to achieve–which we call the pastiche from here on out. We also have as inputs the artwork whose style we we to transfer, known as the style image, and the picture that we want to transfer the style onto, known as the content image.

Before we dive into the math and intuition behind the losses, let’s address a concern you may have. You may be wondering why we use the outputs of intermediate layers of a pretrained image classification network to compute our style and content losses. This is because, for a network to be able to do image classification, it has to understand the image. So, between taking the image as input and outputting its guess at what it is, it’s doing transformations to turn the image pixels into an internal understanding of the content of the image.

The summation notation looks makes the concept look harder than it really is. Basically, we make a list of layers at which we want to compute content loss. We pass the content and pastiches images through the network until one of the layers in the list, take the output of that layer, square the difference between corresponding each value in the output, and sum them all up. We do this for every layer in the list, and sum those up. One thing to note, though: we multiply each of the representations by some value alpha before finding their differences and squaring it.

The style loss is very similar, except instead of comparing the raw outputs of the style and pastiche images at various layers, we compare the Gram matrices of the outputs. A Gram matrix is a matrix which results from multiplying a matrix with the transpose of itself:

Because every column is multiplied with every row in the matrix, we can think of the spatial information that was contained in the original representations to have been “distributed”. The Gram matrix instead contains non-localized information about the image, such as texture, shapes, and weights–style! Now that we have defined the Gram matrix as having information about style, we can find the Euclidean distance between the Gram matrices of the intermediate representations of the pastiche and style image to find how similar they are in style:

Now that we know how it works, let build it. First, let’s implement the Gram matrix layer:

Now, let’s define our network. Let’s create a class with an initializer that sets some important variables:

The variables which we initialize are: the style, content, and pastiches images; the layers at which we compute content and style loss, as well as the alpha and beta weights we multiply the representations by; the pretrained network that we use to get the intermediate representations (we use VGG-19); the Gram matrix computation; the loss computation we do (as MSE is the same as Euclidean distance); and the optimizer we use. We also want to make use of a GPU if we have on on our machine.

Now for the network’s “training” regime. We pass the images through the network one layer at a time. We check to see if it is a layer at which we do a content or style loss computation. If it is, we compute the appropriate loss at that layer. Finally, we add the content and style losses together and call backward on that loss, and take an update step. Here’s how all that looks:

(To use the LBGFS optimizer, it is necessary to pass into the step function a closure function which “reevaluates the model and returns the loss”; we don’t need to do that with any other optimizer…go figure)

One more step before we can start transferring some style: we need to write up a couple of convenience functions:

Now, to produce beautiful art. First, let’s import some stuff, load our images, and put them onto the GPU if we have one:

Finally, let’s define and call our training loop to turn our initially random pastiche into an incredible piece of art:

And that’s it! We have used an optimization method to generate a stylized version of a content image. You can now render any image into the style of any painting–albeit slowly, as the optimization process takes time. Here’s an example that I made from our code: a dancer in the style of a Picasso:

Why does the previous method take so much time? Why do we have to wait for an optimization loop to generate a pretty picture? Can’t we tell a network, “Hey, learn the style of Starry Night so well that I can give you any picture and you’ll turn it into a Starry Night-ified version of the picture instantly”? As a matter of fact, we can!

Essentially, we have an untrained Image Transformation Network which transforms the content image into its best guess at an appealing pastiche image. We then use this as the pastiche image which, along with the content and style images, is passed through the pretrained image classification network (now called the Loss Network) to compute our content and style losses. Finally, to minimize the loss, we backpropagate into the parameters of the Image Transormation Network, not directly into the pastiche image. We do this with a ton of random content image examples, thereby training the Image Transformation Network how to transform any given picture into the style of some predefined artwork.

We now need to add an Image Transformation Network to our now multi-stage network architecture, and make sure that the optimizer is set to optimize the parameters of the ITN. We will be using the architecture from Johnson et al. for our ITN. Replace the last 8 lines of the StyleCNN initializer with this code:

Awesome! Let’s change our save_image function to be able to save not just one image, but a batch of images:

One more order of business. We need to have available to us a dataset of content images as training examples to be passed into our network at every training iteration. We will use the Microsoft COCO dataset for this. You have to install and set up the COCO API before you can do anything with it in PyTorch. The API can be download from source here. After downloading it, install it by running setup.py.

Once you’ve completed those steps, add these imports:

Finally, we replace our main function with this code:

Woo! Now we can train a network to transform any image into a stylized version of it, based on the style of our prepicked image. That is awesome! In case you were wondering, this technology is exactly how apps like Prisma work. Here are some examples from three feedforward networks trained on three different paintings: 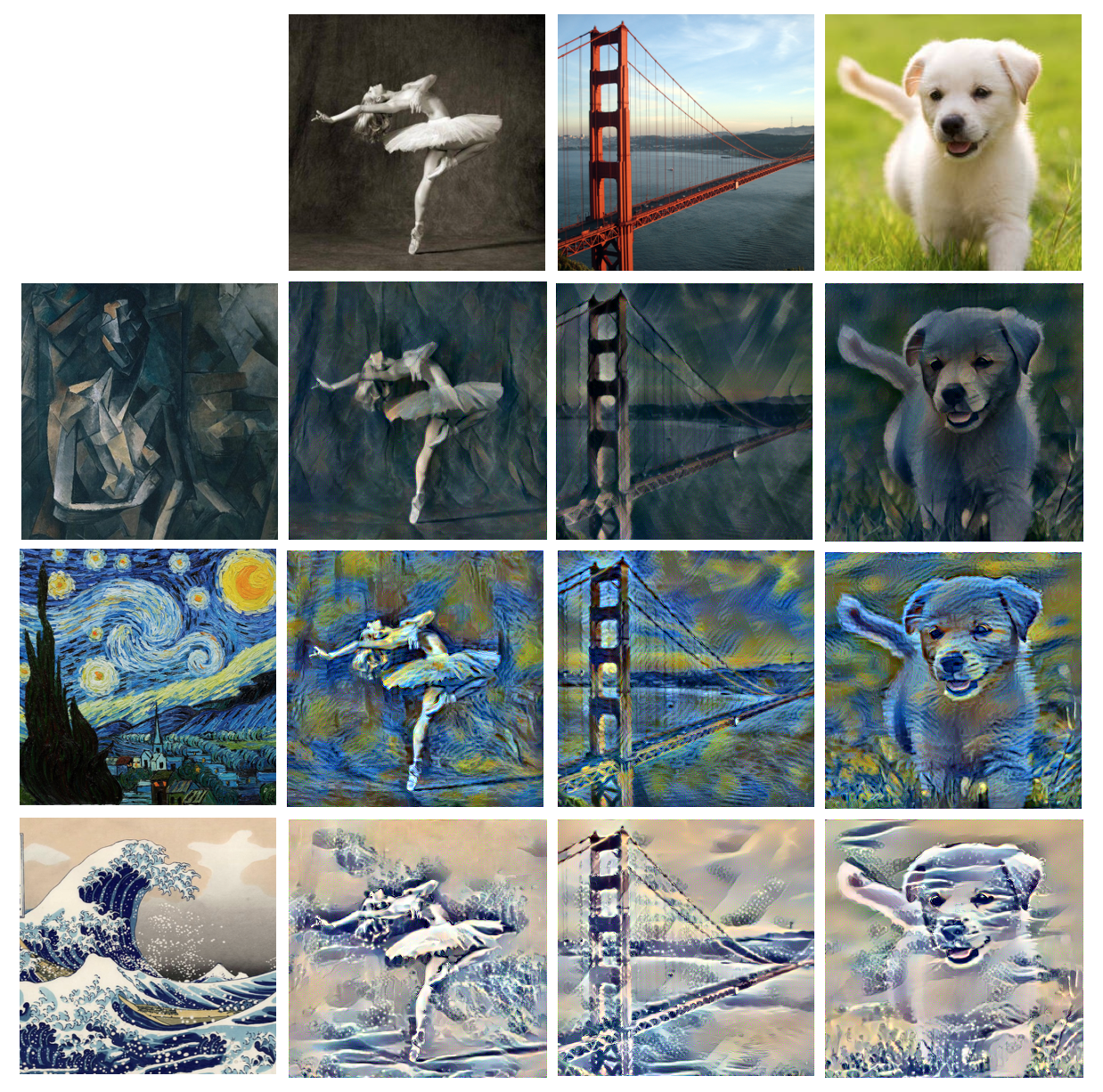 You may have noticed that, although our feedforward implementation can produce stylized pastiches instantly, it can only do so for one given style image. Would it be possible to train a network which can take, in addition to any content image, any style image and produce a pastiche from those two images? In other words, can be make a truly arbitrary neural style transfer network?

As it so happens, a very cool finding in this problem suggested that it is possible. A few years ago, it was found that the Instance Normalization layers in the Image Transformation Networks were the only important layers to represent style. In other words, if we keep all Convolutional parameters the same and learn only new Instance Normalization parameters, we can represent completely different styles in just one network. Here’s the paper with that finding. This suggests that we can take advantage of Instance Norm layers by using in those layers parameters that are specific to each style.

The first attempt to do this was from a team at Cornell. Their solution was using Adaptive Instance Normalization, in which an encoder-decoder architecture was used to generate the Instance Norm parameters from the style images. Here is the paper on that. This has fairly high success.

The latest attempt at achieving arbitrary style transfer was from a team at Google Brain. They used a method almost identical to the one described above, except that they use a pretrained Inception network to transform the style images into Instance Norm parameters instead of using and untrained network and training it, along with the ITN, end-to-end. This method saw wild success and produced beautiful results, achieving true arbitrary neural style transfer. Here is the awesome paper on that.

While I was unable to fully solve the problem, I felt honored to have been able to participate in the research conversation and be on the cutting-edge of such as exciting project. It was thrilling to Google finally solve the problem with such an elegant and beautiful solution.

There’s quite a bit of literature on this problem, so some great next steps would be to skim through them. I linked the papers throughout the article, but I thought I’d post them all in one place too:

Hope you found this exciting application of neural networks to be as fascinating and fun as I do. Happy learning!